This International Women’s Day Erstwilder is here to celebrate some spectacular women from the past.

To this day they still inspire us with their exceptional legacies, whether that be through film, music, their humanitarian work or simply their incredible spirits. Read on to see who is on our list...

Best known for her incredible acting career across stage and screen, Audrey overcame great hardship to achieve her dreams. Growing up in the German occupied Netherlands, Audrey attended the Arnhem Conservatory through the war. Using her ballet prowess, she performed in underground concerts in order to raise money to aid the Dutch Resistance. After the war she began her life in the starlight as a chorus girl, soon moving to title roles and finally her first starring performance in the film Roman Holiday alongside Gregory Peck. And the rest, as they say, is history. Whilst best known for acting, Audrey devoted much of her time to her work as a Goodwill Ambassador for UNICEF. A statue of her stands in the New York UNICEF headquarters entitled ‘The Spirit of Audrey’ in honour of the work she did for them visiting countries like Vietnam, Venezuela, Ecuador, and Ethiopia, among many more.

“I have learnt how to live…how to be in the world and of the world, and not just to stand aside and watch.”

One of the most famous faces across the globe, Marilyn Monroe was far more than just a pretty face. Marilyn had a rough childhood, becoming a ward of the state at the age of nine when her mother was hospitalized, and moving throughout foster homes. She found little success in the acting world at the beginning of her first contract, so she used all her spare time to practice her acting, singing and dancing until her career finally began to pick up momentum. The year 1953 was a breakout year for Marilyn with the release of several standout films in which she caught people’s attention as an actor and sex symbol. She also won ‘Fastest Rising Star’ at the Photoplay Awards, signalling her burgeoning talent. Her career highlights include ‘Gentlemen Prefer Blondes’, ‘How to Marry a Millionaire’ and the hilarious ‘Some Like It Hot’. Marilyn became one the greatest pop culture icons the world has ever seen, despite the hardships of her childhood. Her tenacity, talent and determination are all traits we can aspire to, even when facing hardships. Her legacy also speaks to the importance of seeking help when going through hard times. Did you know, she inspired our "Holly Wood" brooch!

“Just because you fail once, it doesn't mean you're going to fail at everything. keep trying, hold on, and always, always, always believe in yourself because if you don't, then who will?”

Josephine's life was a testament to her passion and spirit. Born and raised in St Louis, Missouri, Baker moved to New York City at the age of 15 and began performing in the Broadway show ‘Shuffle Along’, where she reportedly became the ‘highest-paid chorus girl in vaudeville’. Sailing to Paris at age nineteen, she found great success as a dancer and performer, and her magnetic personality attracted punters in droves. During WWII Josephine acted as an intelligence agent for the French military, collecting information on German troop locations from officials she met at parties. After the war, she received several medals of commendation for her work and service. Josephine also worked as a Civil Rights activist, giving talks at universities on racial inequality, she would refuse to perform for segregated audiences and her fame helped to integrate the live entertainment scene in Las Vegas. Josephine Baker has inspired us to create the ‘Bronze Venus’ Brooch.

“All my life, I have maintained that the people of the world can learn to live together in peace if they are not brought up in prejudice.”

With one look we fell in love with Lauren Bacall, basing our ‘Leading Lady’ brooch on her visionary visage. Growing up in the Bronx, Lauren Bacall studied at the American Academy of Dramatic Arts, alongside fellow student Kirk Douglas. Her career in the limelight started in modelling, she appeared in both Vogue and Harper’s Bizarre before she turned 20! Her beauty and grace gained her the attention of a casting director and she was urged to do a screen test. Appearing in films such as ‘How to Marry a Millionaire’ and ‘The Big Sleep’ among many others she became well known for her ‘look’. Lauren later revealed this ‘look’ (a deep emotional flick of her eyes, with her head lowered) was actually a tool she used to minimise her nerves and hide her quivering from the camera. She also worked fighting for democracy, especially during the Cold-War and the Communist trials in the US, leading to accusations that Bacall herself was a Communist simply because she dared to challenge the powers that be and uphold the rights of the people. Lauren Bacall inspires us to never settle for second best and to never let nerves hold us back.

“I think your whole life shows in your face and you should be proud of that.”

Erstwilder HQ loves having a good dance and The Supremes have supplied tunes that keep us rocking all throughout the day. Starting life as The Primettes, Mary Wilson, Diana Ross, Betty McGlown and Florence Ballard began their careers as backup singers before they became the most well-known Motown group in the world. With their glamorous looks and outfits, The Supremes were called ‘The Pride of Detroit’ by Time Magazine, and impacted the world of music with hits like ‘You Can’t Hurry Love’, ‘You Just Keep Me Hanging On’, and so many more. The Supremes became one of the first black musical acts to appear on television shows like The Ed Sullivan Show and became a success internationally as well as domestically in the US. Starting from humble beginnings as friends in high school, their journey from backup singers to becoming one of the most famous girl bands, Motown bands, and singing superstars in music is a testament to their talent and ambition. Their passion for their craft is an inspiration.

“You can't just sit there and wait for people to give you that golden dream. You've got to get out there and make it happen for yourself.” – Diana Ross

A star inside and out, you might already have realised Hedy Lamarr is the inspiration behind or Virgo the Visionary brooch. At 12 Hedy Lamarr won a beauty contest in Vienna and, born to a Galician-Jewish father and a Hungarian-Jewish mother, she later helped her mother get out of Austria and move to the US. As well as a film career spanning over 2 decades, Hedy was also a largely self-taught inventor. During the war efforts she worked on a device to jam and set off course radio-controlled torpedoes, and with the help of a pianist friend they created just that. Though her contributions were not adopted by the military, a similar device was later implemented and their contributions were finally recognised in the late twentieth century. A star of not just the screen, Hedy Lamarr never let the expectations of others hold her back or influence what she was and what she could achieve.

“A good painting to me has always been like a friend. It keeps me company, comforts and inspires.” As we approach the new year, we found ourselves reflecting on the last 12 months. It's certainly been memorable and one for the history books! So without further ado, here's our A to Z round up of Erstwilder's 2020... Our Black Friday event is on, and this year it’s ROAR-some! We've got a super-exclusive gift with purchase available while stocks last, plus 25% off a wide selection of designs until 10AM (AEDT) Monday 30th November. Happy Shopping!

Love the necklace. Got one for my self and one for a present. One of them had a very minor imperfection - with the layers of Snoopy not quite lined up but also not too noticeable from front.

I love Koala Bears so had to have this gorgeous piece when it was released. It was sold out in the USA so I went directly to Erstwilder and was thrilled that they would ship to the USA. My package was neatly packaged, with a cute note and lots of safety packing inside. It arrived about 10 days after I placed my order! The artwork is spectacular! I am now a collector of their fine pieces of wearable art!

Super light and easy to wear 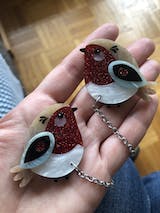